Talk about what's going on in the world of sport.
Post Reply
140 posts 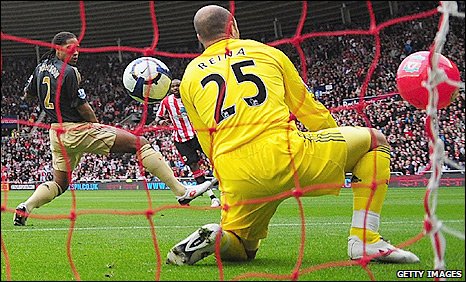 I also had a quick scan through the laws of the game and couldn't find anything about foreign objects on the pitch. The rules cover spectator whistles but no beach balls or general spectator interference.

check out the name of this sport


fifa laws of game wrote: Extra balls on the field of play
If an extra ball enters the field of play during the match, the referee must stop
the match only if it interferes with play. Play must be restarted by a dropped
ball in the position where the match ball was at the time when the match
was stopped, unless play was stopped inside the goal area, in which case the
referee drops the ball on the goal area line parallel to the goal line at the point
nearest to where the ball was located when play was stopped.
If an extra ball enters the field eld of play during the match without interfering
with play, the referee must have it removed at the earliest possible opportunity.

And this one is a bit of a giggle:

From page 21 of the laws Simmo posted above

The Referee...stops, suspends or abandons the match because of outside interference of any kind.

The Referee...stops, suspends or abandons the match because of outside interference of any kind, such as whistles, thrown projectiles or breakout of deadly ethnic violence.

There fixed that for you.
Top

In England, a Soccer Tea Party
Manchester United Fans Try to Push Out Their American Owner with a New Color Scheme

The family of American businessman Malcolm Glazer, owner of the English Premier League's fabled Manchester United club, is locked in a strange battle of wills with part of the soccer club's rabid fan base. The Glazers acquired United in 2005 through a leveraged buyout, and the club is saddled with more than $1 billion in debt—which fans fear will knock United off its perch atop the Premier League as creditors come calling.

So as Manchester won the Carling Cup tournament Sunday at London's Wembley Stadium, an unusual battle played out in the stands. Many Manchester United fans wore not the club's traditional red, but rather green and gold—the colors of Newton Heath, the club's original incarnation until 1902.

The retro color scheme has morphed into a symbol of resistance against the Glazers, who also own the NFL's Tampa Bay Buccaneers. A group called Manchester United Supporters' Trust, or MUST, is pressuring the family into selling the club—to a collective of fans, the group hopes, rather than another investor. The group has sold more than 30,000 green-and-gold scarves in the past month, and at Wembley on Sunday, 30,000 balloons in the Newton Heath colors were sent skyward.

Manchester United declined to comment for this article, but the Glazers don't seem amused. Green and yellow is now a frequent sight at the club's 76,000-seat Old Trafford stadium, causing problems like one last month, when a security guard was fired after returning to fans an anti-Glazer banner that had been confiscated.

Fears of the Glazers' doing great damage to United so far seem misplaced. The team has made regular additions to its already bulging trophy case in recent years, and its crusty manager, Sir Alex Ferguson, has remained at the helm with stars like Wayne Rooney and Ryan Giggs still dominating its roster.

The situation is testing the adage that, in sports, winning cures everything. Ticket prices keep rising, and corporate sponsors are being asked to shell out more to associate with the team, both tougher sells in a weak economy. Season-ticket renewals have dipped by roughly 7,000 this season, and luxury-box usage has fallen about 16%.

Meanwhile, there are now 53,000 members of MUST, and the group has hired Blue State Digital—a firm that worked for President Barack Obama's 2008 campaign—in an attempt to propel its ranks past 100,000.
"The green-and-gold campaign is so powerful because it's a protest against the current ownership that's totally compatible with supporting the team," says Duncan Drasdo, the chief executive of MUST. "It's a growing movement because it presents an alternative view of how the club should be run."

The protest at Wembley came just two days after Portsmouth became the first top-flight club in England to enter administration—a form of bankruptcy protection—as a result of debts of roughly $107 million. Also last week, a study of European soccer showed that Premier League clubs are carrying more debt than the rest of Europe's 714 licensed clubs put together.

Protests against the Glazers began with the ink barely dry on their 2005 acquisition. Days later, some 10,000 fans marched on Old Trafford in a show of opposition to the proposed takeover. Some fans later established a supporter-owned team, while others targeted United board members for removal. "Love United, Hate Glazer" bumper stickers populated the streets.

The campaign has picked up further steam, as United's financial condition has come into clearer focus. In January, the club published its 2008-2009 accounts, showing that if it hadn't sold star Cristiano Ronaldo last year, the enormous interest payments on the club's debt would have produced a net loss. Days later, the Glazers published a bond-raising prospectus that laid bare the full details of all their debt. In short, United's balance sheet is as red as its famous shirts—which explains the rise of the green and gold. The simplicity of the hook ensured it immediately caught on, and the ambitions of those behind the protest have soared.

MUST is rooted in a group of disgruntled fans that has been around since the late 1990s. A predecessor organization owned shares in the club when it was publicly traded; the group is now funded largely from proceeds that were reaped when the Glazers acquired Manchester United.

In the past month, MUST says it has held discussions with three separate groups looking to buy the club from the Glazers and turn the model of soccer-club ownership in England upside down by placing the club in the hands of fans. The idea has worked in places like Spain, where Real Madrid and Barcelona, the country's two leading clubs, both belong to their fans, hundreds of thousands of them.

One group, known as the Red Knights, has promised supporters a "golden share" in the club so they can approve or veto future owners should it successfully wrest control of the club from the Glazer family. Reports late Monday said a group of bankers and lawyers in London also are involved in the bid. The Glazers remain adamant that the club isn't for sale and on Monday reaffirmed their commitment to the club.

Still, MUST sees an opening for change. "This is what we've been waiting for, and I think there's also a desire politically to look at the ownership of football clubs and treat it as a special case," says Mr. Drasdo.

From memory ManUre have sufficient revenue streams to keep the creditors at bay, and though season ticket renewals are down, I'm sure they'd have a waiting list comparable to the MCC. I don't think this will amount to much but the point about the debt of their competitors is interesting. Portsmouth are the first but I do not think they will be the last to go into administration.
Top

No! Please don't do this. I've been following FCUM for 5 years waiting for the day they meet MU. This would ruin everything if suddenly people had no reason to defect. f**k!

BTW for those interested they've made it to the 7th division

they're FCUM fans in my sig block
Top

yob wrote: BTW for those interested they've made it to the 7th division

yob wrote:No! Please don't do this. I've been following FCUM for 5 years waiting for the day they meet MU. This would ruin everything if suddenly people had no reason to defect. f**k!

BTW for those interested they've made it to the 7th division

I've been following AFC Wimbledon to see when they play mk Dons.

Yeah I was the same. I like them both. But who hates the Dons more than MU? My heart will always be with FCUM

11th this year. Maybe not good for promotion. But I can wait.

Could you imagine a FCUM v Man City derby? What a bloody love-in.
Top