Background
- Bellerive Oval is on the opposite side of the river, currently approx 20k capacity, limited in expansion capability by the site, and by number of major events it can hold due to being in a residential area. It also has limited public transport capabilities
- Macquarie Point is a former industrial site on Hobart's waterfront, approx 8 ha, currently undergoing design for urban rejuvenation
- There have been proposals for both light rail and a ferry system discussed by government and councils for several years, both terminating near Macquarie Point.
- A government assembled AFL Taskforce has just published their Business Plan report for a Tasmanian AFL team. http://www.premier.tas.gov.au/documents ... smania.pdf . Among other things, it suggests a 30k capacity stadium at Macquarie Point, which will host half the games (the other half at York Park in Launceston).
- The Taskforce report included two concept designs for the stadium. The report notes that these designs are not part of the Taskforce's work, but were submitted to them independently.
- While tied to the AFL team, such a venue is proposed to be multi-purpose and host all field sports as well as other events such as concerts.

Here are summaries of the two designs.

"Tasmania Stadium" by Jaws Architects
I can't find any further information outside what is in the PDF linked above. It's a bit hard to Google, with a lot of results for "University of Tasmania Stadium". The renders include a number of other locations apart from Macquarie Point.

Some pics from the report shown below - low quality unfortunately.

Note the "shell" shape - certainly not going to be cheap to build! The open section is facing the city. 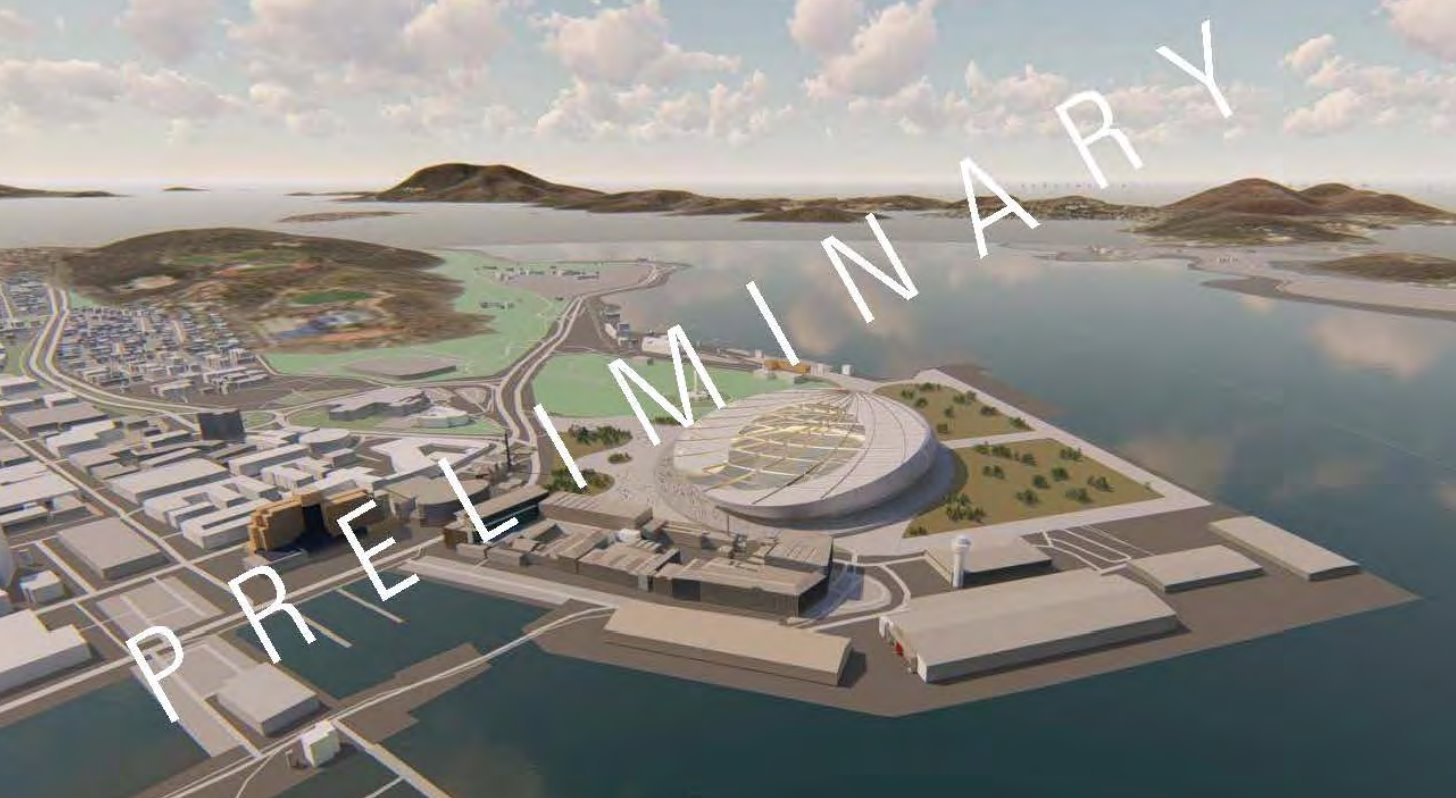 Note I am not an AFL fan, I'm a big supporter of an A-League team, and if you look closely here you'll see retractable seating marked - woohoo! Even the most ardent AFL fan should know that a stadium in Tassie needs to be as versatile as possible. 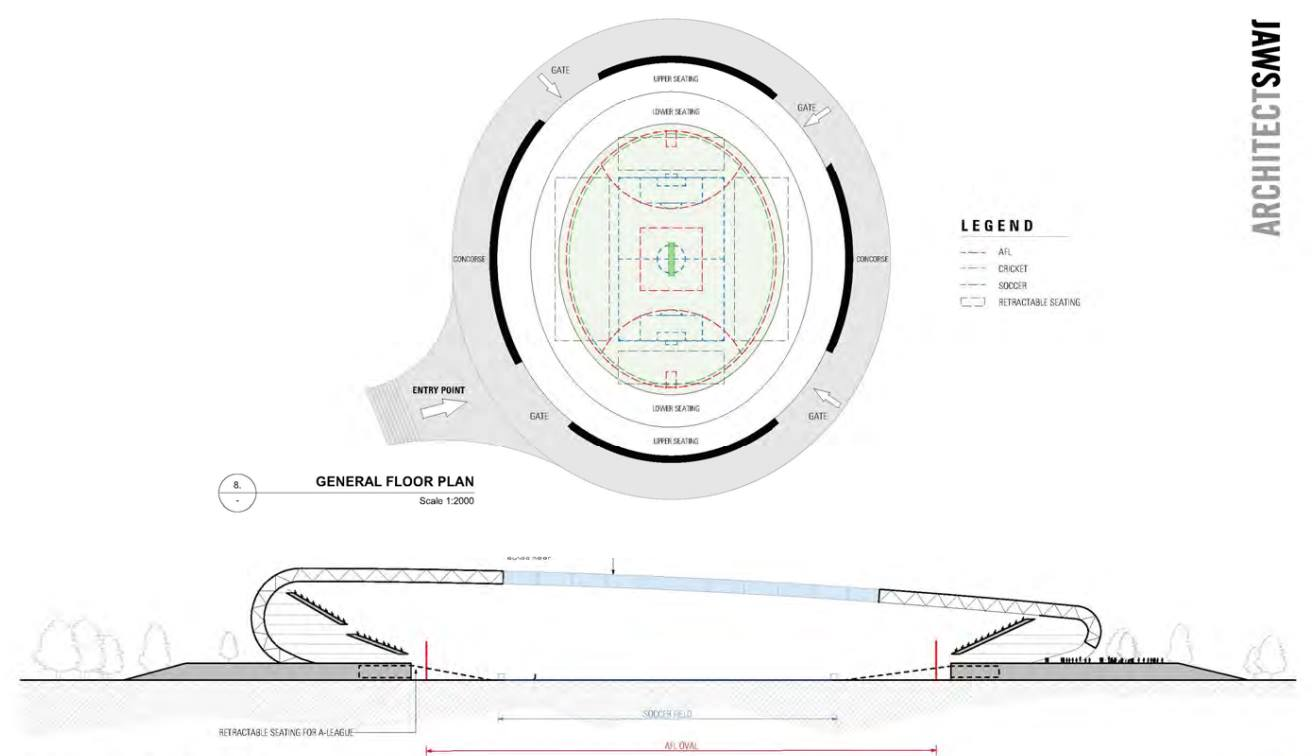 This was the design which got a bit of media coverage in October last year. There is a website here: https://www.taspark.com.au/ as well as more detailed information in this PDF: https://drive.google.com/file/d/1gK7Q-I ... 7rXWY/view
I think the design is great as it includes lots of green space, not just around the stadium but integrated into it, and there is also a hotel with suites around the top row of the stadium. 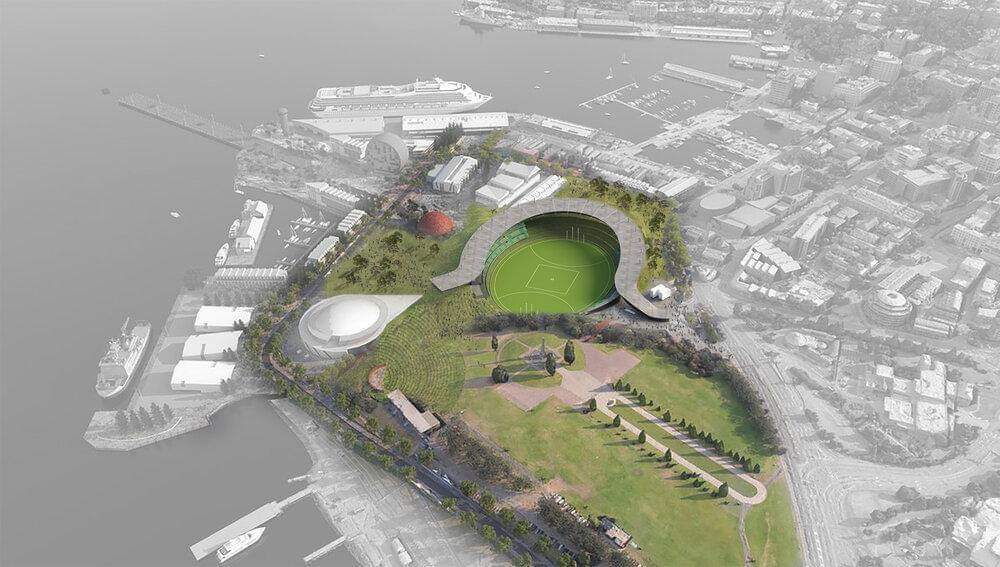 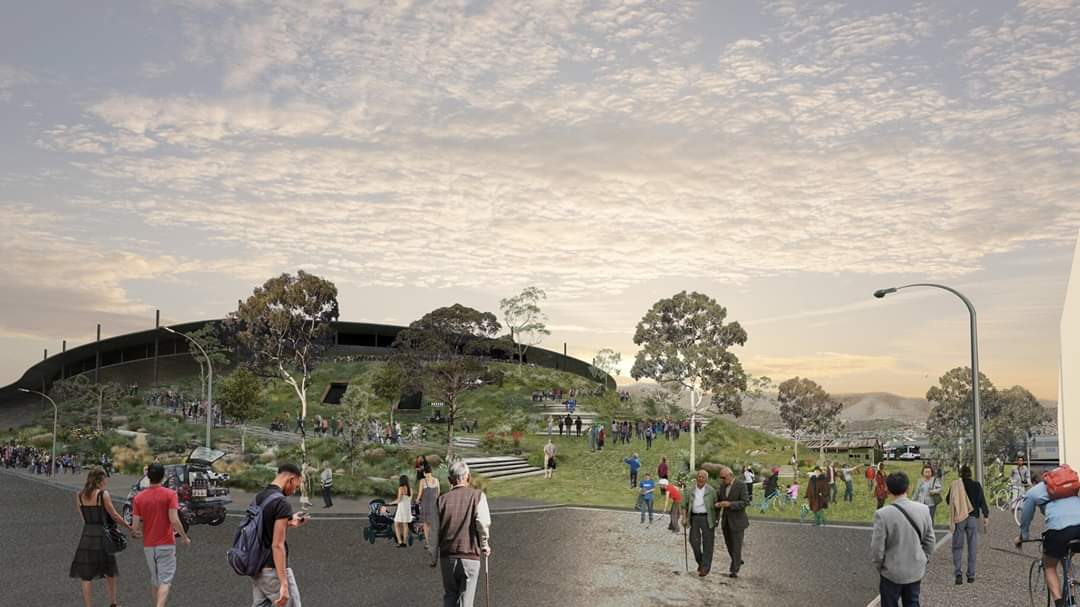 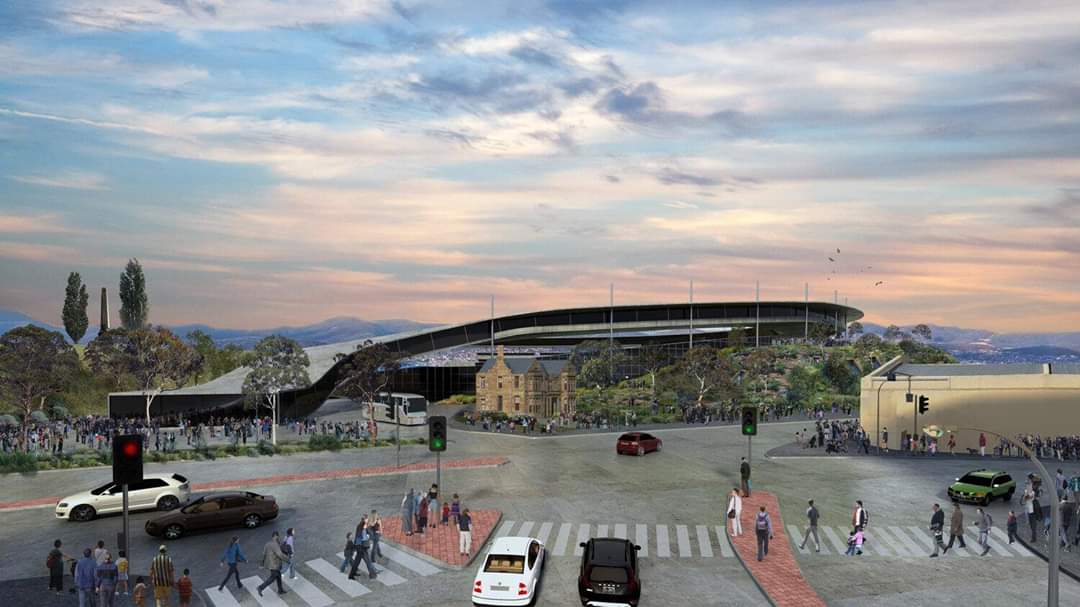 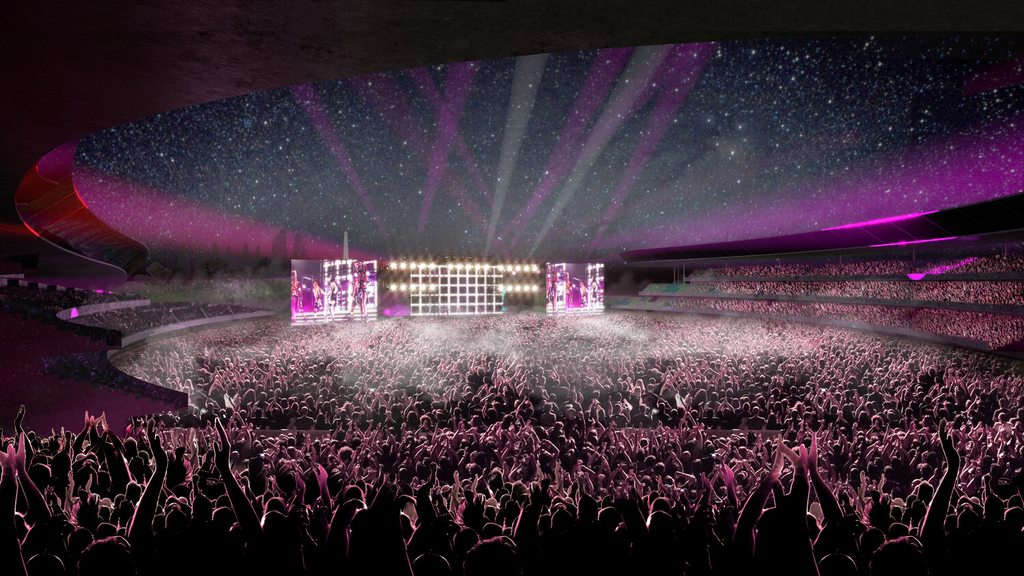 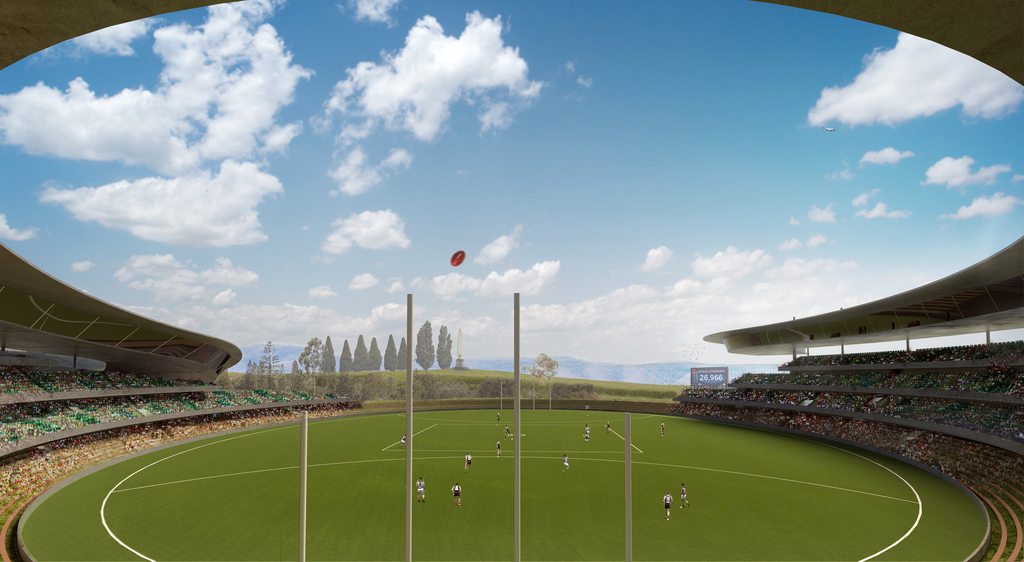 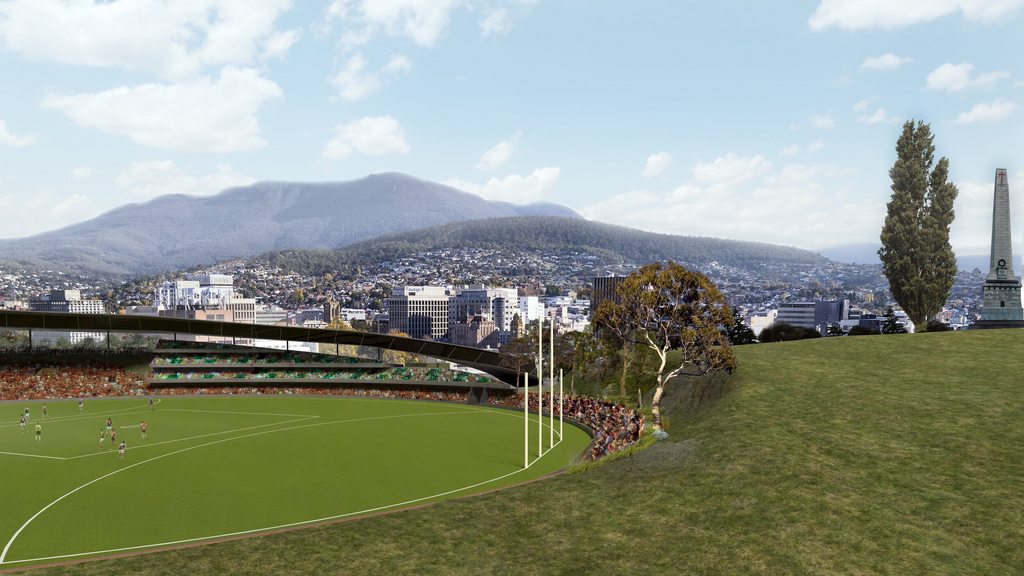 Have been following this quite closely and it'll be interesting to see if a Tasmanian AFL team will eventuate. I hope it does.

That's the first I've seen of the 'Tasmania Stadium' proposal - does look quite optimistic. The Macquarie Point proposal looks more realistic and was also covered on Austadiums back in October: https://www.austadiums.com/news/news.php?id=704

I see it also recommended increasing the capacity of UTAS Stadium from 20,000 to 30,000, although I'm not sure if that'll be required at least in the early stages?
Top

One thing that is worth noting is that, sadly, the premier immediately ruled out a stadium at Macquarie Point. It's been a contentious development - $50m of government funds close to a decade ago and so far they've come up with a couple of plans with fancy renders but not much has happened. I'm sure behind the scenes there is activity but it's excellent fodder for the media.

I bet the government just thinks that another idea for the site will just cause more delays and they'll be blamed for it. There aren't really many other central locations where a stadium would fit.

Regarding York Park, I think the plan is that they get an upgrade to 27,500 (presumably the upgrade won't take long, and will happen between a team being confirmed and the first match) and the bigger games go there - the smaller games go to the 18-20k Bellerive Oval.... then I guess after a new stadium is built it will even out?
Top

That's a shame to hear - maybe a lack of vision by the Tas gov? Did they mention anything about the other proposal? Sounds like if a team is based there, it'll be at Bellerive and UTAS for at least the short-medium term. Maybe they think it's unrealistic and they're focusing on the NBL team and the upgrade of the Derwent Entertainment Centre first?
Top

So it seems the Government has been quietly working away in the background...

And today have announced a proposal for a stadium at Regatta Point (about 500m from the location of the other plans above). 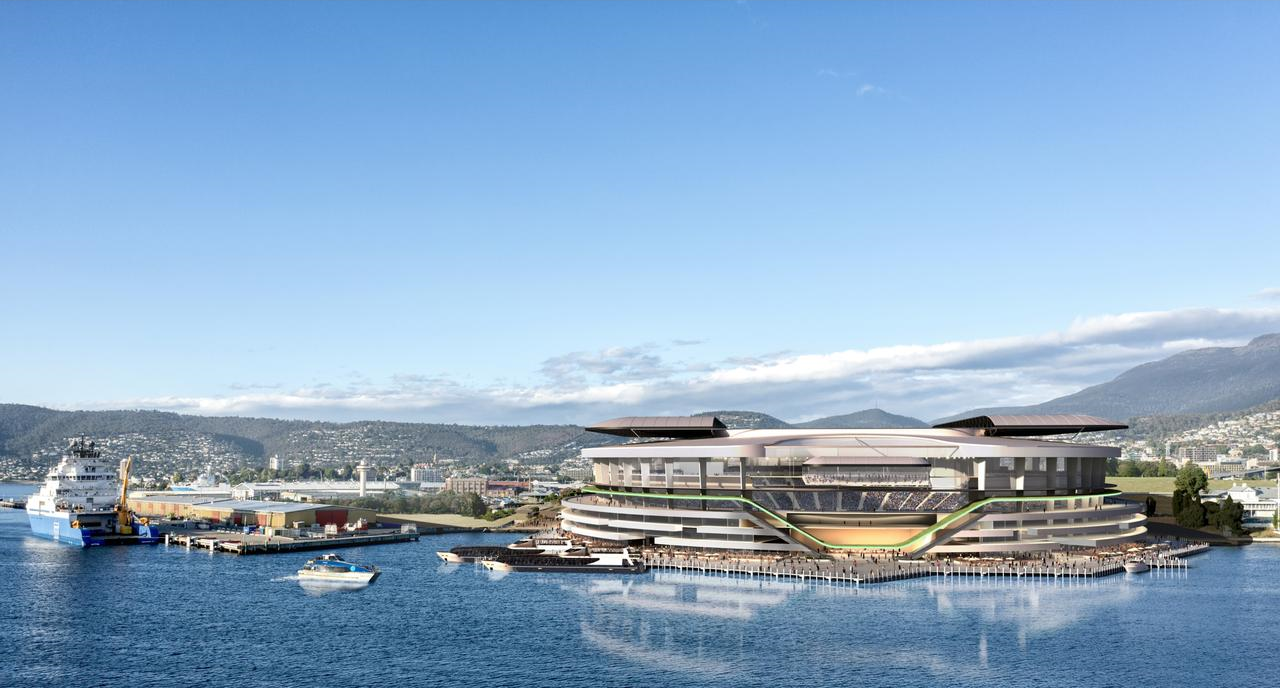 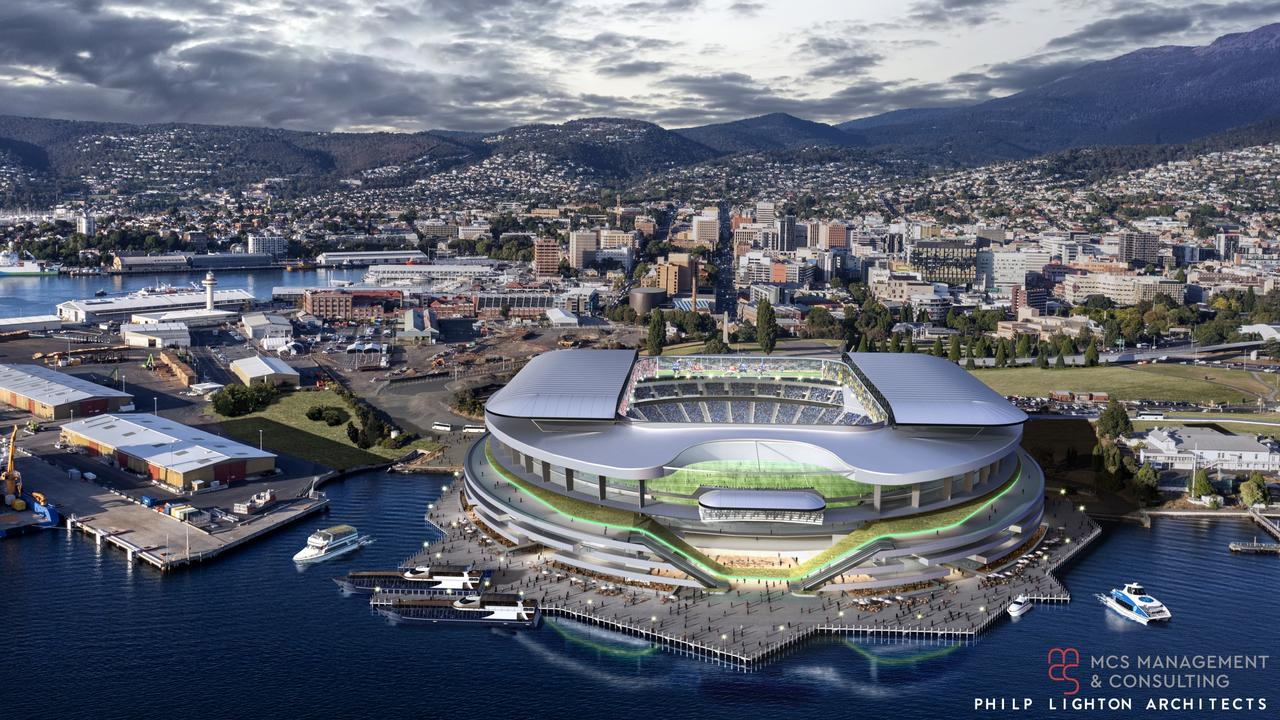 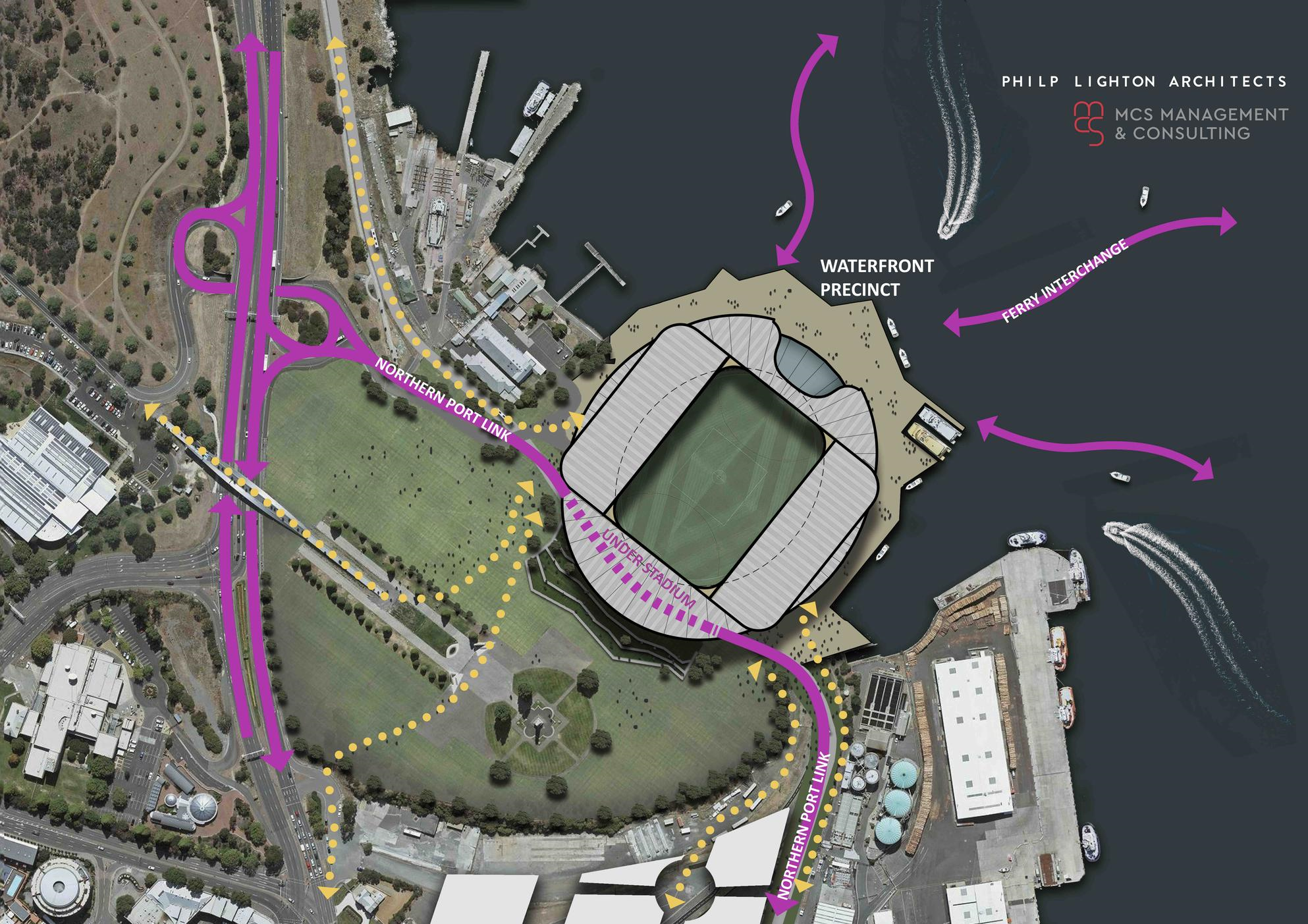 Edit of mine - to show how much the stadium would jut out into the river: 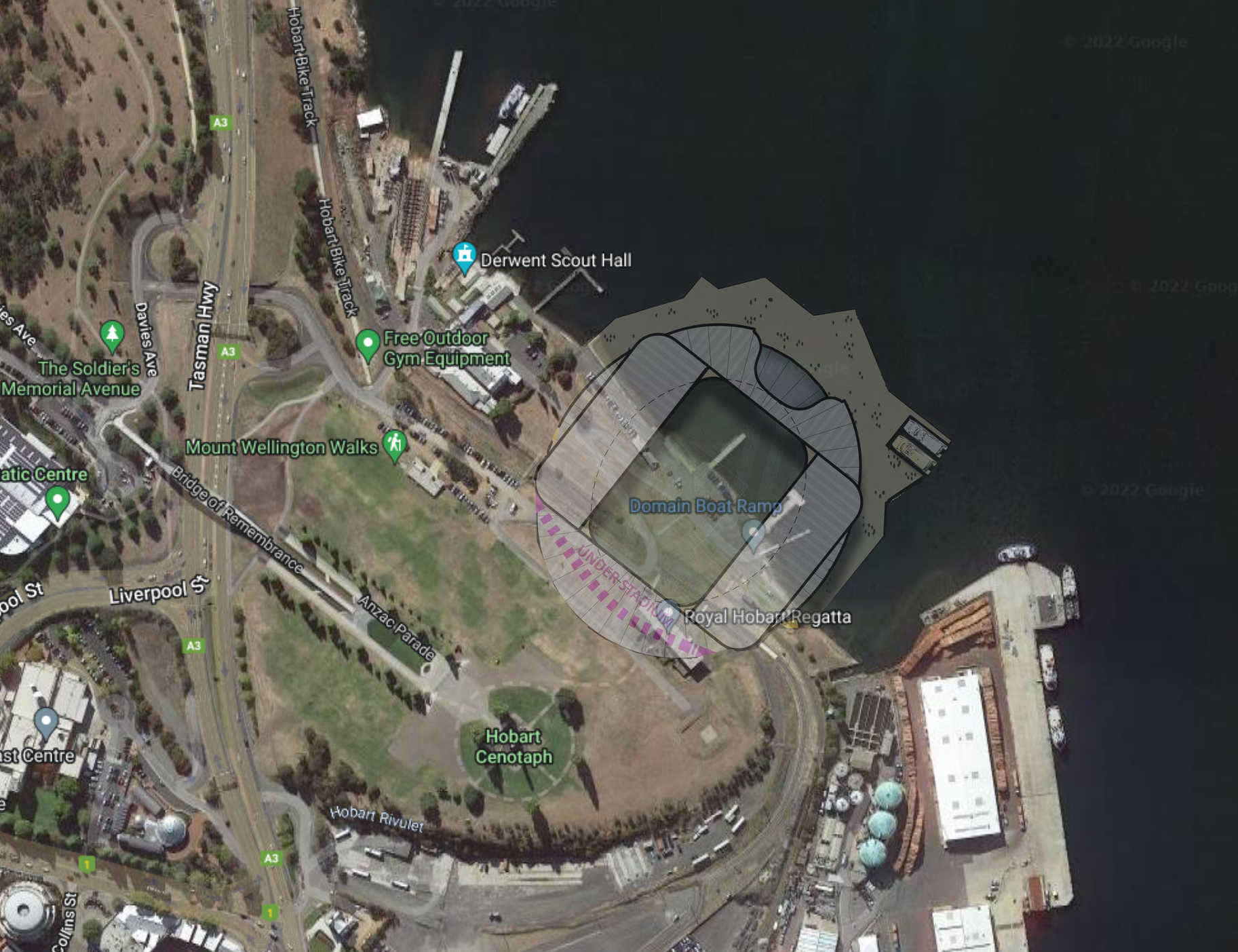 From the media coverage (Mercury (paywalled), ABC) it would:

* Be built at Regatta Point, extending into the river
* Cost about $750m
* Have a capacity of 27,000 (or 30,000 for concerts)
* Have a closable roof
* Be surrounded by a public foreshore boardwalk, including ferry terminals
* Be dependent on an AFL license (if granted later this year, it could be completed by the start of the 2027 season)
* Co-funded by federal/state/local government and managed by "Stadiums Tasmania" state gov body

What hasn't been announced is whether it will have moveable seating to allow for rectangular pitch sports. To spend this much on a stadium in a small market such as Tasmania, the venue needs to be as flexible and versatile as possible.

It also hasn't been said how this will impact Cricket Tasmania and Bellerive Oval. Would they shift to this venue? Then what happens to the recently upgrade Bellerive? If they don't move, how does that affect the viability of this one?

The ball is (figuratively) now in the AFL's court. From reports I've read, they made a rooved stadium a condition of a license, thinking that would keep Tassie away for a while. We'll see what happens now...
Top

First - I found this link to the original report from February 2022, which some might find interesting - https://www.stategrowth.tas.gov.au/__da ... Report.pdf

It compared six options, with Regatta Point and Macquarie Point the preferred sites.

A few months ago, the preferred location moved back to Macquarie Point.

Today, some renders have been provided (at an event where the AFL provided an update) - so here's some more eye candy: 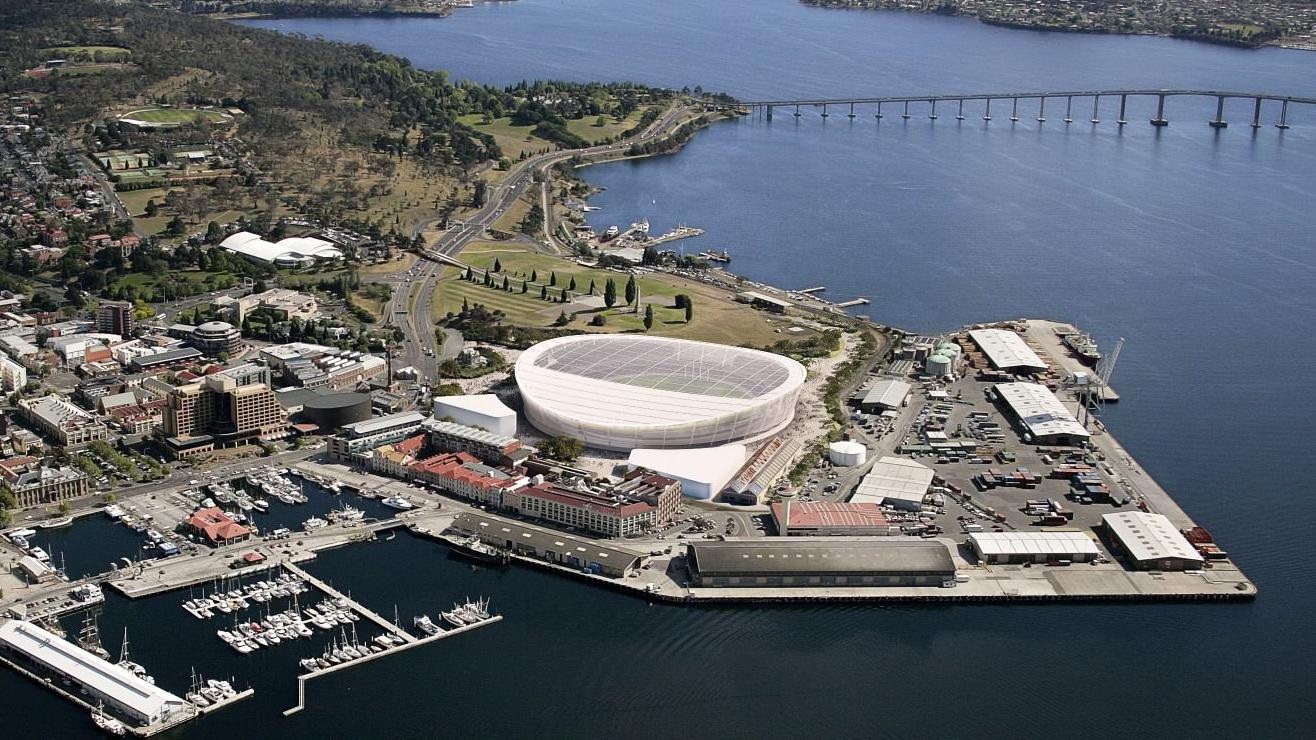 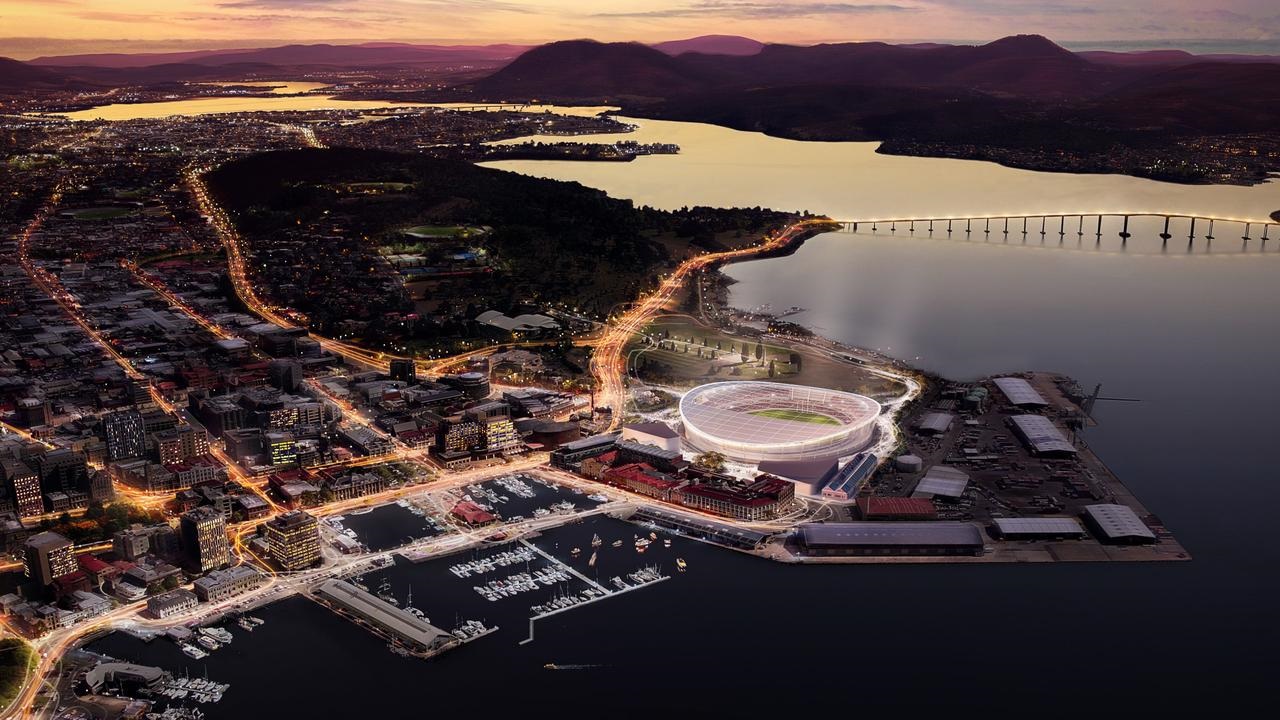 Quite a different design to the last render. Looking good though. Does the size look right or too small? And it looks like a closed roof, not retractable?
Top

The current concept is a result of the Tas Government saying it will only fund half of the estimate of $750m that was given for the stadium at Regatta Point. The AFL looking for savings pushed Macquarie Point, a site nearby where the whole structure would be on level land, and considered the Forsyth Barr Stadium roof trying to reduce the project cost.

First problem is Macquarie Point is part reclaimed land so below ground costs will be high but not as high as building in the river.

Second problem is the Forsyth Barr roof works well for a rectangular stadium with an 85m infield to span but when you get a 140m wide infield and an oval format the structure becomes much more complex and more costly than Forsyth Barr and similar to the structure required for a retractable roof.

Third problem that comes with a roofed stadium is the need for rim lighting which for a 140m wide infield means the internal height of the stadium has to increase to allow the lights to be aimed at the pitch at acceptable angles. The increased height means increased massing in a politically sensitive site. A lower roof with light towers might be more acceptable.
Top

The business case has been released today.

If I have read it correctly the moveable seating to morph to rectangular format has been removed.